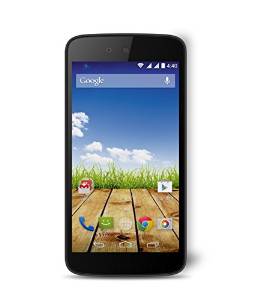 Micromax Canvas A1 Android One at Rs.6499 in India

Micromax Canvas A1 powered by Android One launched in India

About Micromax Canvas A1 – Android One Smartphone

The first batch of smartphones include Micromax Canvas A1, Karbonn Sparkle V and Spice Dream Uno. They are similar in specifications apart from their outer design which differentiates them from each other. The Micromax Canvas A1 flaunts a 4.5-inch IPS display with a FWVGA resolution (854×480 pixels). It features a 5-megapixel rear and 2-megapixel front facing camera.

The Canvas A1 is operational on MediaTek MT6582 quad-core processor clocked at 1.3 GHz coupled with 1 GB of RAM and 4 GB internal memory which can be further expanded up to 32 GB via microSD card. Micromax Canvas A1 runs on Android 4.4.4 KitKat and Google has promised an update to Android L as and when it is made available.

On the connectivity front, the device has dual-SIM card slots, is 3G supported, and has Wi-Fi and Bluetooth modules as well. Additionally, it also features a set of basic set of sensors. The Canvas A1 will draw its juice from a 1700 mAh battery.

Micromax Canvas A1 is priced at Rs. 6,499 and is available on Amazon.in for now but it would also be seen in brick and mortar enclosures in the coming weeks. These Android One powered devices will compete against the likes of Moto E which is already a successful device and is priced in the same bracket.