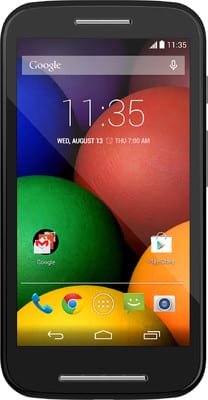 Motorola has launched its third smartphone after the much loved Moto G and Moto X. This time, it’s a power packed device with a jaw dropping price tag of Rs. 6999 which will be available for sale via Flipkart starting May 14th. This handset marks Motorola’s entry below the Rs. 10,000 mark, thereby providing great features at an attractive cost.

Moto E is a dual SIM phone running on Android 4.4 (Kit Kat) with an additional assurance from the company’s side that the smartphone will be upgraded to the next major version of Android, something that cannot be guaranteed in most smartphones in this class. What makes it outsmart all other phones in its league is the fact that this is the only smartphone that provides a very high quality display in this price range. Moto E has a 4.3 inch display that supports qHD 960 X 540 pixel resolutions, and if that’s not enough for the grab, the screen comes with Gorilla Glass 3 protection, making it scratch resistant; along with a nano coating that will make the phone resistant to water splashes. This feature is noteworthy because it is only found in phones that cost twice as much as Moto E.

What will make Motorola’s latest budget phone a worthy performer? It’s 1.2GHz dual-core Snapdragon 200 processor, with 1GB RAM and 4GB internal storage. This is a major differentiating factor from both the previous versions which did not provide any external storage. The device supports micro SD cards up to 32 GB.

The phone comes with a single rear camera of 5 MP. This is not accompanied with LED flash and a front camera, which can be a deal breaker for some. There is a single white LED notification light and the connectivity options include 3G, Wi-Fi, GPS with GLONASS and Bluetooth 4.0. The phone is backed by a decent 1,980mAh battery, which according to company claims wills last 24 hours on full charge.

India is in the first set of markets where the phone is being released. The colors currently listed are only black and white. However, the company is offering varying colors in interchangeable backs called Motorola Shells, which you can use to customize the phone as per your choice.

At this cost and these specifications, Moto E is estimated to be the prime choice for many first time smartphone buyers who are planning to purchase a budget phone which can enable them to enjoy a wide variety of exciting features. If a front camera and LED flash or not the things you need, there is nothing like this one. The midnight launch on Flipkart will tell us if the price tag with a brimful of features will do the magic or not.